EPSCoR (Established (formerly Experimental) Program to Stimulate Competitive Research was created by the National Science Foundation (NSF) in response to the uneven distribution of federal research and development grants in 1979. Federal research programs grew dramatically after World War II but only a small number of states benefitted. This support ignored the rise of regional education and research institutions across the nation. To encourage diverse talent originating in every state, EPSCoR began. 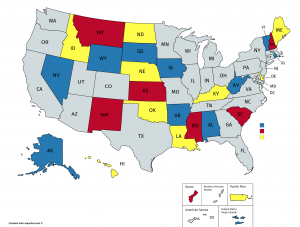 Currently there are six federal agencies with EPSCoR initiatives: National Institutes of Health, National Science Foundation, Department of Energy, National Aeronautics and Space Administration, and the U.S. Department of Agriculture. The EPSCoR program at the Department of Defense (DEPSCoR) was resurrected and funded in FY 2019. For more information log onto http://www.epscorideafoundation.org/about/overview.

Alabama EPSCoR is eligible for EPSCoR (Established Program to Stimulate Competitive Research) Programs at the National Science Foundation (NSF), U.S. Department of Energy (DOE), National Aeronautics and Space Administration (NASA), and in July 2019, a new solicitation from the Department of Defense (DEPSCoR). In 2016, Alabama became ineligible for the U.S. Department of Agriculture (USDA) EPSCoR Program but still have a few ongoing grants that will last through 2020.

There are eight Alabama EPSCoR institutions, these include:

For the ten year period from FY2009 to FY2018, Alabama EPSCoR was awarded 235 awards for a total of $152M from the National Science Foundation, the Department of Energy, the National Aeronautics and Space Administration and the U.S. Department of Agriculture. Each federal research agency has multiple mechanisms, or funding programs, to fund research. Funding mechanisms vary in their focus depending on the mission, some variables include the type of research being done (basic or applied); it might support a researcher early in their career or one with more experience; it may require a single or a team of researchers. The team may need to be from a single jurisdiction (state) or several jurisdictions; there may be a requirement to conduct outreach programs or work with a national laboratory. Funding levels and period of performance (POP) vary as well. The researchers may need to show adequate progress before being awarded the full award. 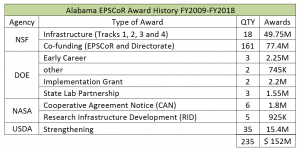